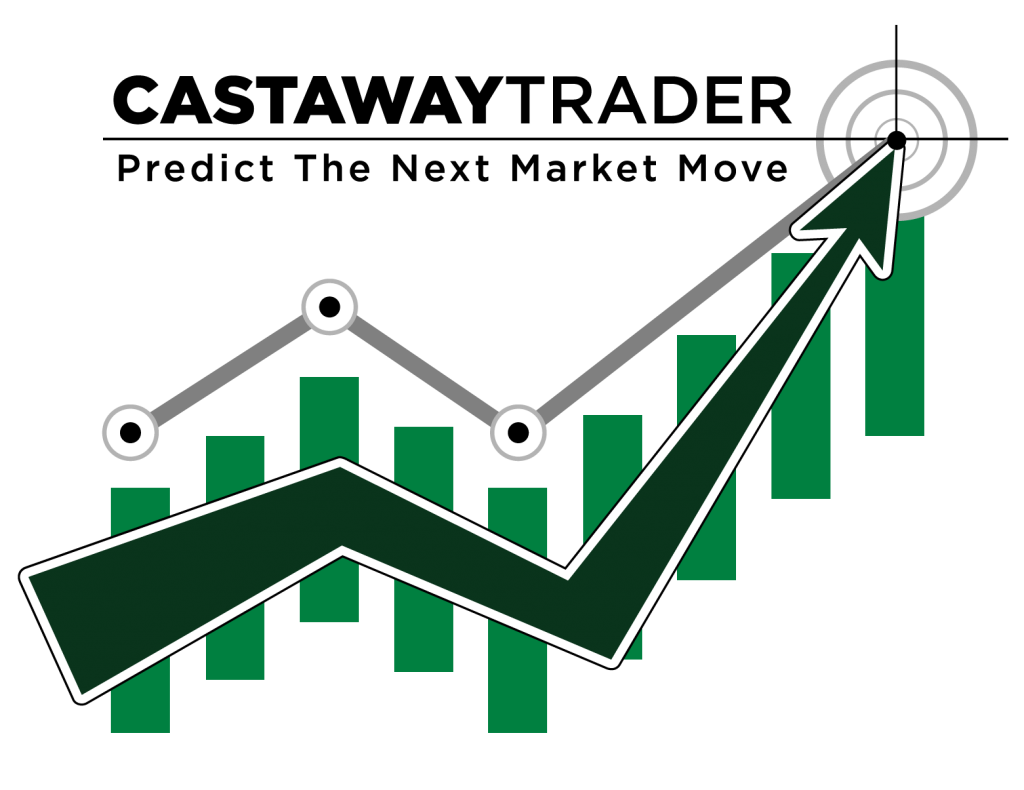 When Elliott introduced the five wave fractal he acknowledged that he could not find any rational explanation of the fractal nature of the markets that keep playing out similar patterns:

“possibly the reason why I have not yet, and possibly will never know why this series occurs is because it is a law of nature. The laws of nature, and incidentally economics, are ruthless, which is as it should be.”

Let me offer you a potential explanation of the phenomenon of repeating five wave fractal as modified by Ian Copsey.

In 1962 Everett Rogers, a professor of rural sociology, published his book “Diffusion of Innovations”. This book was based on his findings in research that examined how ideas are spread among groups of people. He identified five major stages of adoption of innovation, new idea, product or practice by members of a given culture. Rogers found out that new ideas are not adopted by all individuals in a social system at the same time. It takes different time for different people to begin using the new idea. He proposed a classification of all the members of a society into five groups based on criteria of how long it takes for them to begin using the new idea.

Let’s try to apply tenets of the diffusion theory to financial markets in order to explain different stages of a trending move by type of investors who drive the price at different stages of rallies. Our goal would be to align the basic five wave up fractal proposed by the Harmonic Elliott Wave theory with classification of social groups proposed by Rogers.

“Innovators” or “Reversal Hunters” or “Contrarian”. 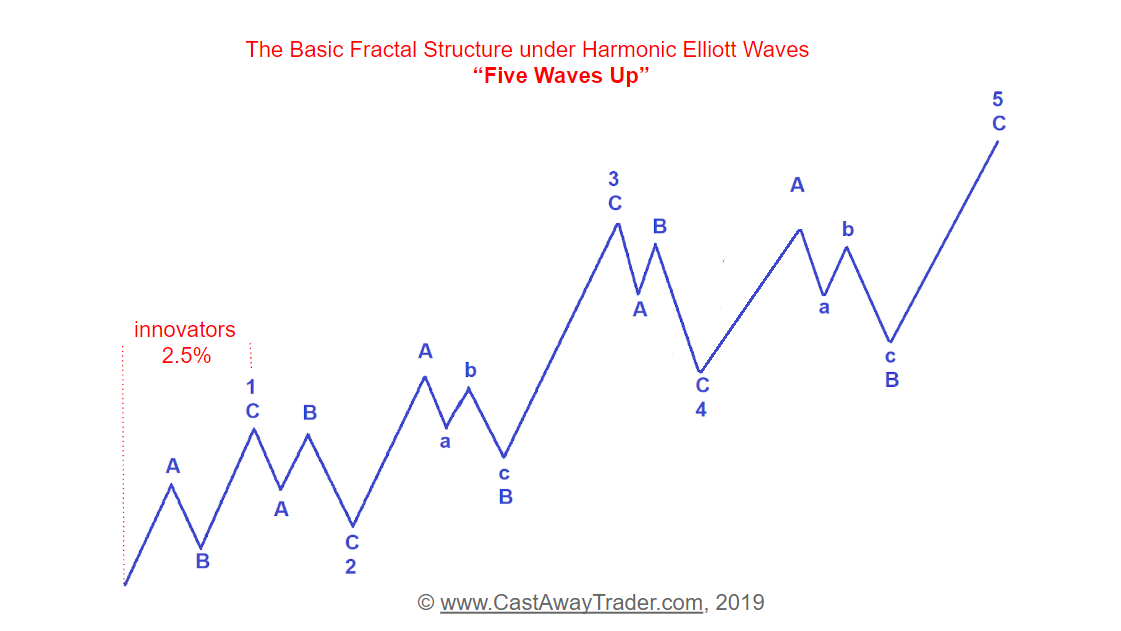 In financial markets they are “reversal hunters” or “contrarians”. They can’t stand a sustained trending move. They love to oppose themselves to the general prevailing sentiment in the market. They buy when most others are selling and sell when others are buying. They are risk takers and tend to buy too early in the bear market and short too early in the bull market. But they are financially and emotionally prepared to withstand pressure of the market. As Rogers noted: “The innovator is also willing to accept the occasional setback when new ideas prove unsuccessful.” (Rogers, 1971).

That concept perfectly explains why wave 1 of a new developing trend is always weak. The driving force behind the wave 1 of a new trend is “innovators”. There are only few innovators, traders who believe that preceding decline is over and a new trend is under way. The majority of market participants still feels bearish and considers that first move up off a major low made by preceding decline as an opportunity to add to their shorts.

Early adopters tend to be integrated into the local social system more than innovators. People in the early adopter category seem to have the greatest degree of opinion leadership in most social systems. They provide advice and information sought by other adopters about a novelty. The early adopter is usually respected by his or her peers and has a reputation for successful and discrete use of new ideas (Rogers, 1971).

Early adopters will normally have a reasonably high social status. Think of all those traders who post their trading ideas and market analysis on Twitter, Stocktwits or Tradingview and have tens of thousands of followers! They are thought leaders who are considered experts and trusted by thousands of other traders. They do not take as much risk as innovators and tend to make more careful decisions as to whether or not to call a start of a new bullish trend. They will be waiting to get solid confirmation like a bullish cross of the major moving averages. That does not happen in the wave 1 up but it happens in the second leg of an unfolding rally, wave A of 3 up. On average there are 13.5% of a social group who could be considered “Early Adopters”. 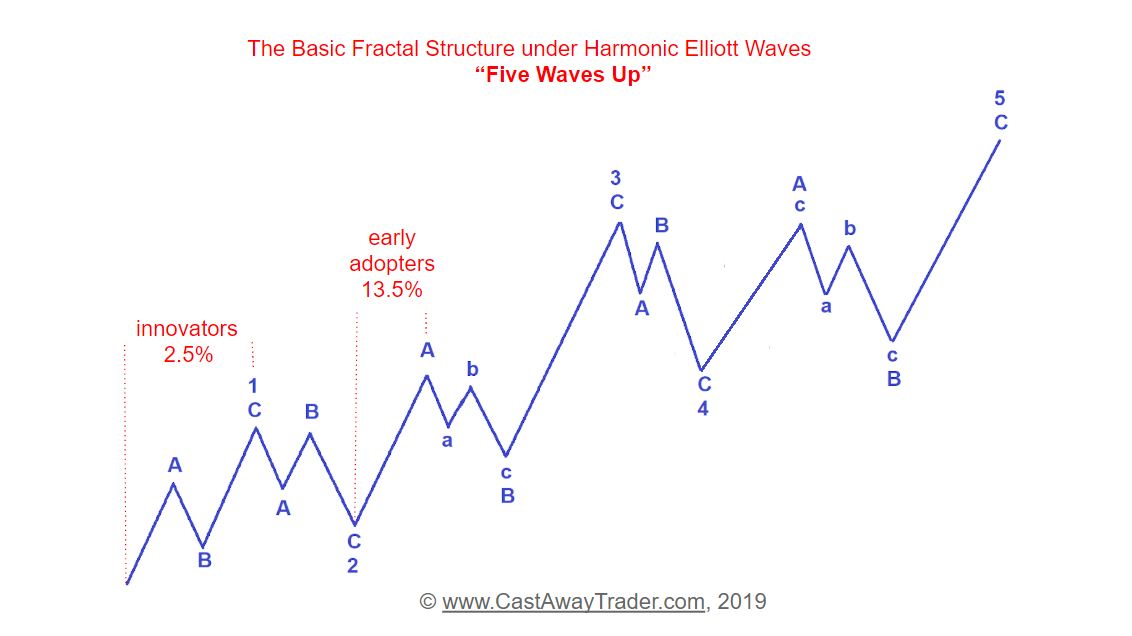 Members of the early majority category will adopt new ideas just before the average member of a social system. They interact frequently with peers, but are not often found holding leadership positions. As the link between very early adopters and people late to adopt, early majority adopters play an important part in the diffusion process. Their innovation-decision time is relatively longer than innovators and early adopters, since they deliberate some time before completely adopting a new idea. Seldom leading, early majority adopters willingly follow in adopting innovations (Rogers, 1971). 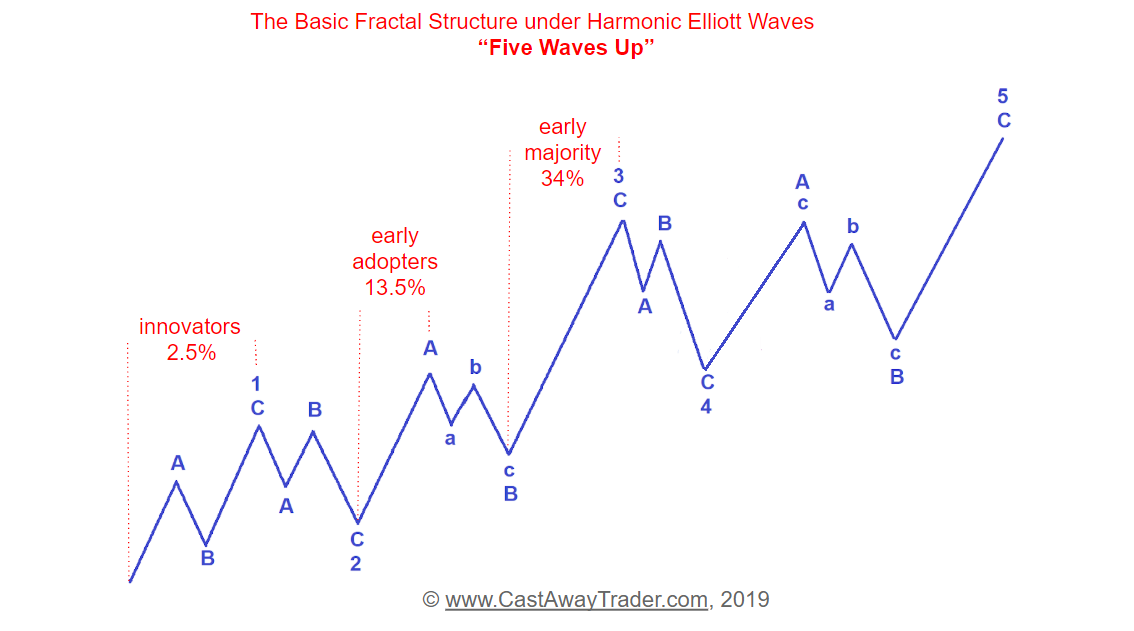 When price breaks out over the preceding top of the wave A of 3 the rally starts to accelerate and pullbacks become very shallow. This is when the rally finally begins to draw attention of wide crowds of so called “momentum” traders. This type of traders is reasonably risk averse and wants to be sure that their, often more limited, capital is invested in assets that may quickly appreciate in price. They never try to anticipate a reversal but rather look for an established strong trend to join. They have an active social status but they are not thought leaders. They not only follow the “experts” but early adopters quite often closely communicate with them. When they make decision about joining the very well established trend they take into account opinions of those thought leaders.

The late majority are a skeptical group, adopting new ideas just after the average member of a social system. Their adoption may be borne out of economic necessity and in response to increasing social pressure. They are cautious about innovations, and are reluctant to adopt until most others in their social system do so first. An innovation must definitely have the weight of system norms behind it to convince the late majority. While they may be persuaded about the utility of an innovation, there must be strong pressure from peers to adopt (Rogers, 1971).

In financial market this group of traders is too conservative to join a rally when it is accelerating in wave C of 3. They are too cautious and their main concern is not to buy “too late” or “at the top”. They would wait for a pullback of a corrective wave 4 down to buy stocks on weakness. 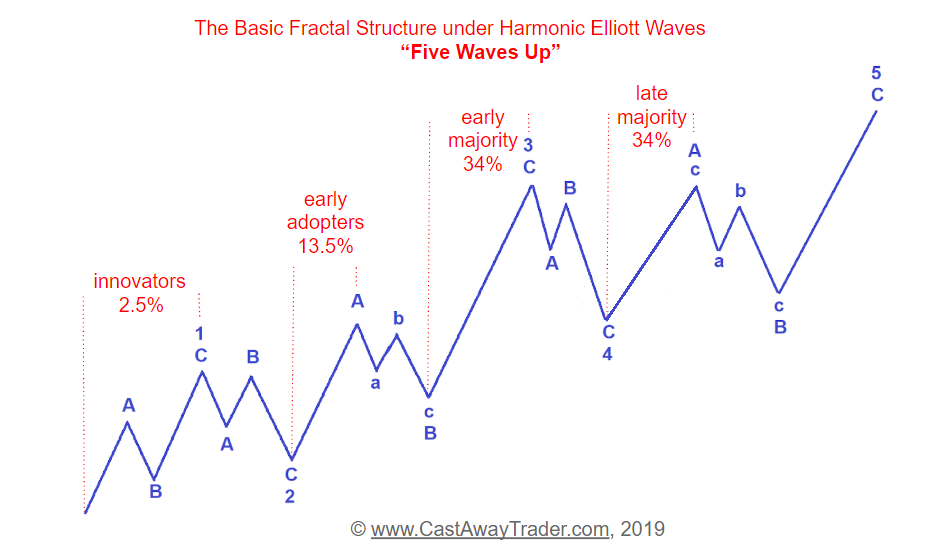 This category of traders has less interaction with thought leaders ( early adopters ) and tends to make more independent decisions than the other groups of traders. This late majority group is rarely active in the social media, does not have many followers and, as a result, does not provide any form of thought leadership for other traders.

That may be a good explanation why rally in wave A of 5 driven by “Late Majority” is almost never is strong enough to break over the preceding top made by the rally in wave 3. The “Late Majority” got burned trying to play breakouts many times. That is why they buy stocks on weakness and see them when prices approaches important resistance at previous top.

Laggards are traditionalists and the last to adopt an innovation. Possessing almost no opinion leadership, laggards are localite to the point of being isolates compared to the other adopter categories. Individual laggards mainly interact with other traditionalists. An innovation finally adopted by a laggard may already be rendered obsolete by more recent ideas already in use by innovators. Laggards are likely to be suspicious not only of innovations, but of innovators and change agents as well (Rogers, 1971).

Laggards are always late to the party. They are the driving force of the final wave C of 5 that completes the whole rally. This is the last spike of price before reversal. 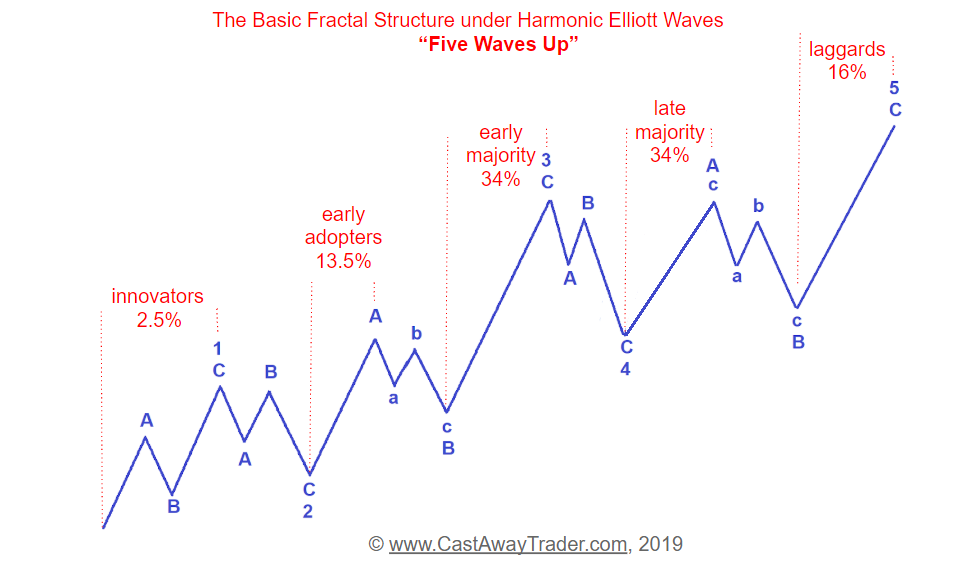 At this point innovators turn skeptical about prospects of this rally and start watching for signs of reversal. This last rally literally drags the laggards into the market when price takes out the previous top made by the wave 3 up. At that point laggards can not longer resist the growing temptation to join that bullish party they have been watching on sidelines. They do not have much available capital to trade and this is why the top of the final spike in wave C of 5 is normally characterized by thin trading volume and participation. This final move up in many cases comes as a spike because at this point the vast majority of traders except for innovators are convinced that this rally will keep going up. Conversely, bears are demoralized by continuation of the rally and they are often forced to close their shorts when price takes out the previous top. That lack of sellers lets such weak buyers as “laggards” to push price to new higher highs despite relatively low amount of fresh buying.

In my opinion, this theory perfectly explains character of each wave. However, you can not apply that theory to the classic five wave fractal originally proposed by R.N. Elliott because he had only three waves in direction of the trend. That is another argument in favor of the modified version of the Wave Principle.

Trading stocks, options, or futures carries a high level of risk, and may not be suitable for all investors. Before deciding to trade, you should carefully consider your objectives, financial situation, needs and level of experience. CastAway Trader LLC provides general overview of trading methods that does not take into account your objectives, financial situation or needs. The content of this website must not be construed as personal advice. The possibility exists that you could sustain a loss in excess of your deposited funds and therefore, you should not speculate with capital that you cannot afford to lose. You should be aware of all the risks associated with trading. You should seek advice from an independent financial advisor. Past performance is not necessarily indicative of future success.