Does Russian market ETF have any good setup? Spoiler: no, it does not

RSX is the symbol of the VanEck Vectors Russia ETF that tracks a market-cap-weighted and -selected index of Russian companies. The total amount of assets is $1.6 bln. 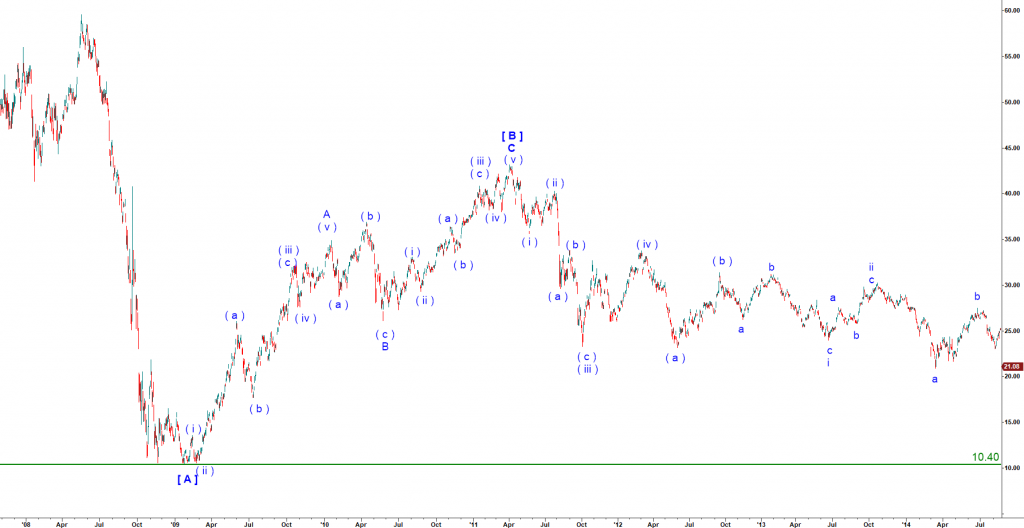 Let’s start with the first scenario where it was all of wave [ B ] up. Then it implies that we should get next an impulsive looking decline in wave [ C ] down subdivided into five waves.

And as you can see on the chart below, we did indeed get a decline subdivided into five waves. That five wave count may look suspicious because of extended wave ( v ) down. Normally wave ( iii ) in five wave fractal is the strongest. But the rule says wave ( iii ) can not be the shortest. That means that if wave ( iii ) is longer than wave ( i ) then sometimes wave ( v ) gets extended. So that count is valid.

That fact strongly invalidates the scenario where waves [ B ] up and [ C ] down have been completed.

That wave B up of ( B ) up will most likely have an ugly (a)-(b)-(c) structure. In general wave B of ( B ) is the least predictable wave with the ugliest possible structure. You should avoid trading it at all costs. The only reasonable scenario would be the case when we have a deep wave ( b ) down into the green target area in order to play the final subwave ( c ) of wave B up. Until then I would be focusing on trading other instruments.