For months I have been tracking a corrective move down off the top reached by Bitcoin in December 2017.

In the process I made several winning trades. But I never traded bitcoin itself but Bitcoin Investment Trust (Symbol: GBTC), a fund you can buy and sell like a regular stock from your on-line brokerage account.

I correctly predicted that very last move down in my previous report on Bitcoin dated 11/11/2018. The problem is that I would like Bitcoin to get dumped by retail investors to under 5,000. This is what normally happens at the end of the prolonged corrective decline. When long term holders throw in towel affected by talking heads predicting the price going to zero. And now we see many articles by some reputable analysts from a major investment bank predicting Bitcoin to hit $1,500 soon.

Because I expect Bitcoin to bottom very soon I decided its time to check a setup for the trading instrument of my choice mimicking bitcoin price, GBTC. And for GBTC the bottom may be in. It has a very completed corrective (W)-(X)-(Y) structure for a completed wave ( 4 ) down. Moreover, the critical support for the wave ( 4 ) down is the low of wave (B) of ( 3 ) at 5.33. So far GBTC reached 5.40 on 15 November 2018.

If it breaks down under that critical support at 5.33 that would significantly damage the bullish scenario where we should get a rally to a new all time high in wave ( 5 ) up. But as long as we hold that support bears have to be very cautious here because we have a very completed corrective structure and rally may start any moment. The only problem for “the bottom is in” scenario is absence of that long awaited final panic selling by retail investors. Otherwise it looks like a great long setup! 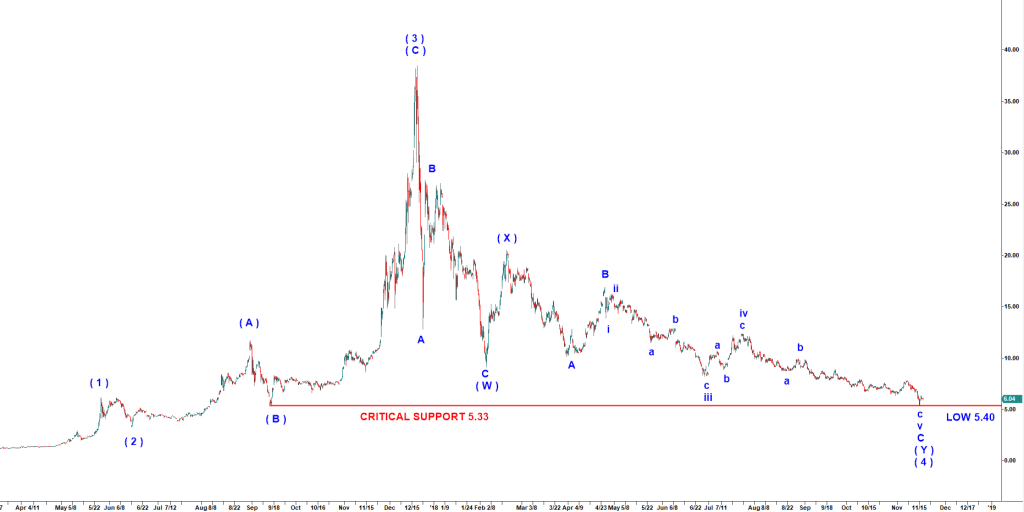