1. What You Need To Know To Make A Trade:

The main reason to trade is to make money. To make money in trading we buy stocks, futures or call options if we expect price to go higher. Alternatively, we may short a stock (borrow a stock to sell it), sell futures or buy a put option when we expect price of a stock to decline. From this we may conclude that first of all we need to know direction of the expected price move. In addition, we need to know how far price may advance or decline. And we need to have clear understanding when it is the time to acknowledge that we were wrong and the scenario we envisioned becomes unrealistic.

The Harmonic Elliott Wave Theory provides us with valuable insights about the future moves of the price. Not only we can forecast direction and approximate path for the next price move but we also may come up with high probability target zone for that future move in price. But the most valuable piece of information that can be derived from the market analysis is directional bias. The Harmonic Elliott Wave lets you identify whether price follows a trending or impulsive structure, or it is in directionless or corrective mode.

Implication for trading The Harmonic Elliott wave theory lets a trader to identify the directional bias, a direction of the trend on a higher timeframe.

The Harmonic Elliott Wave Theory literally makes you adopt and rigorously follow the fundamental trading truism: “To trade successfully, you must trade with the trend”. To understand why its crucially important to trade with the trend we need to clarify first what trend really is.

The Five Wave fractal shown below is the main instrument of the  Harmonic Elliott Wave theory. Every major trending price move either up or down tends to follow that price structure. Any trending price move is simply a sequence of higher highs and higher lows. I have highlighted for you higher highs with blue dots and higher lows with red dots. If you connect the starting point of the Five Wave up fractal in the right lower corner with the ending point in the upper right corner of the chart with a straight line that line would have a clean upward slope. 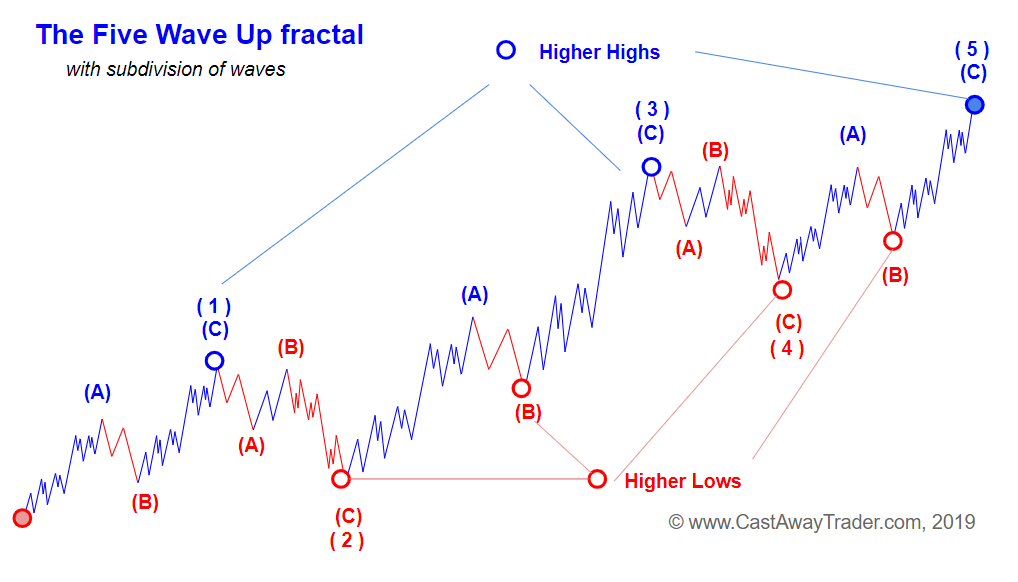 However, as you can see on the chart above, price does not move up in a straight line. We can easily identify several distinctive segments of that that fractal. We call those fractals waves. Those waves are labelled as (1), ( 2), (3), (4) and (5). Every wave is composed of three segments called subwaves and labelled (A), (B) and (C). The Five Wave fractal is composed of fifteen small segments called subwaves. Those fifteen subwaves form five waves. Until we can recognize all those fifteen subwaves the rally that follows the Five Wave up fractal can not be considered completed. 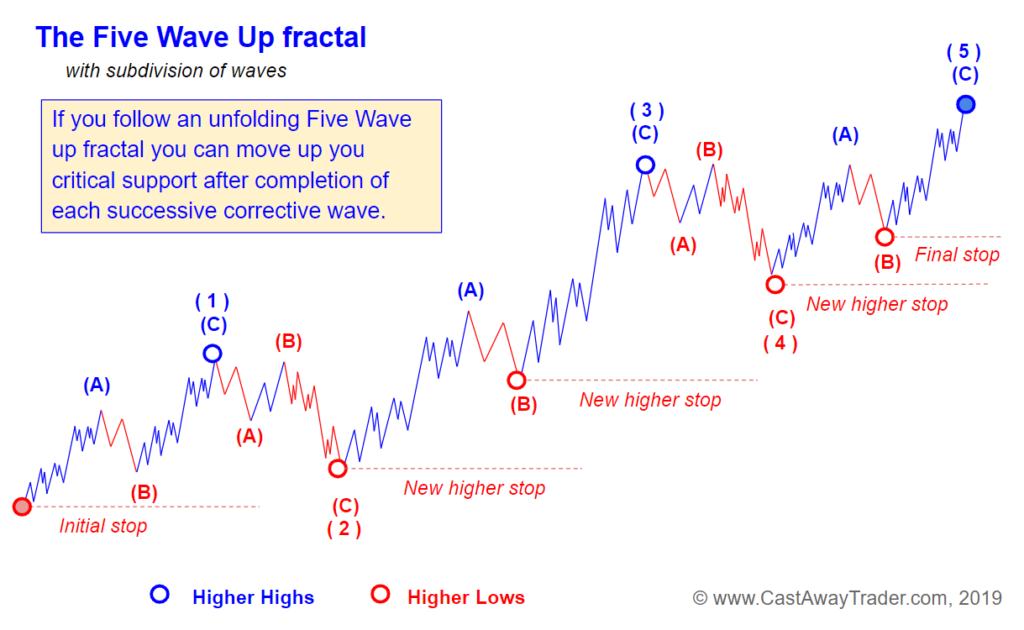 If price moves down and violates any of the critical support we consider that event invalidation of the count. For example, under the Five Wave up fractal price shall keep moving higher because the directional bias is up. If suddenly price breaks down under the low made by previous completed corrective wave that violates the core principle of a trending move. Remember, trending move in up direction is simply a sequence of higher highs and higher lows.

What makes the impulsive waves great trading vehicles? First, you have a tailwind, a trending momentum. If you deal with an up trending move bulls is the prevailing force in the market. They control the price and become more and more confident about strength of the trend. After every new push to a new higher high bears find more and more difficult to break the trend. Every pullback makes a higher low.

That feature of the Five Wave up fractal suggests one simple yet efficient trading strategy. After completion of an impulsive subwave you buy a pullback that has A-B-C structure and makes a low that is higher than the low made by the previous corrective wave. For example, you can buy a pullback in wave 2 down and expect wave 3 up that should drive the price to new higher high over the top of preceding rally in wave 1 up. You have a directional bias which is up and you can calculate a target for the expected move up in wave 3 based on common ratios between wave 3 and wave 1. But that fractal also lets you control your risks. Because wave 2 has to hold over the starting point of wave 1 up you can set a stop order that that point.

Implication for trading The simplest trading strategy supported by Wave Analysis is to buy corrective pullbacks. Specifically you buy a pullback that (1) follows a completed impulsive subwave, and (2) has a completed A-B-C structure, and (3) makes a low that is higher than the low made by the previous corrective wave.

The very same fractal will produce a similar long setup at a later stage of its development. After rally in an impulsive wave 3 up gets completed time comes for bears to counter attack in a corrective wave 4 down. You can buy a pullback in wave 4 down and expect wave 5 up that should drive the price to new higher high over the top of preceding rally in wave 3 up. And again you have all components of a good trade:

– a directional bias which is up; and

– a potential upside target for the expected move up in wave 5 up based on common ratios between wave 5 and the total distance covered by price in waves 1 and 3; and

–  calculated amount of risk for this trade. Because wave 4 down has to hold over the low of preceding pullback in wave 2 down you can set a stop order at that previous low.

The cornerstone of the Harmonic Elliott Wave Theory is the idea that price tends to move along repeatable patterns or fractals. If we can identify a pattern in play we can use a model of that fractal to forecast future moves in price.

2. We trade by counting waves, not by guessing. 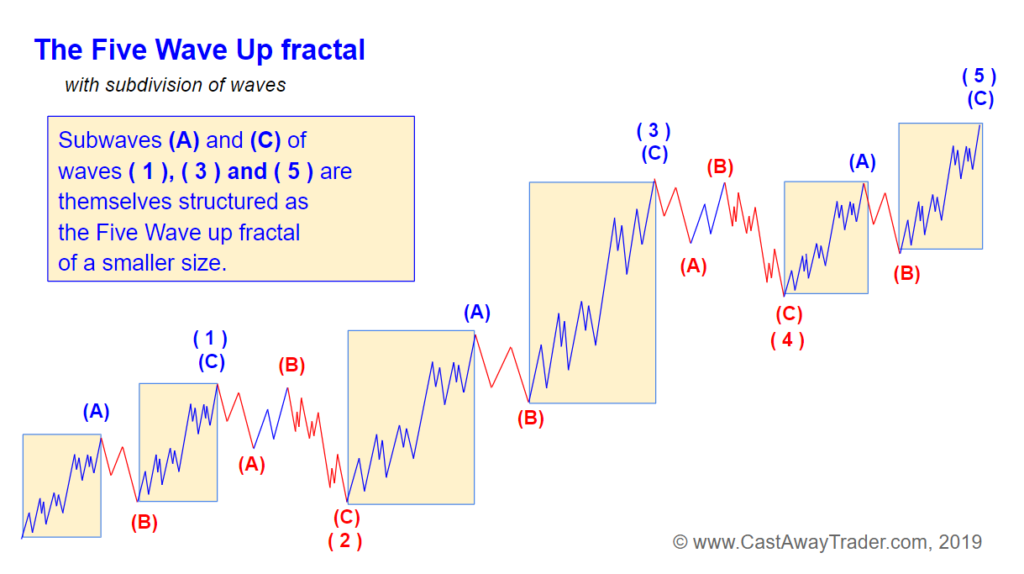 For example, lets zoom-in subwave (C) of (3) to examine its micro structure. 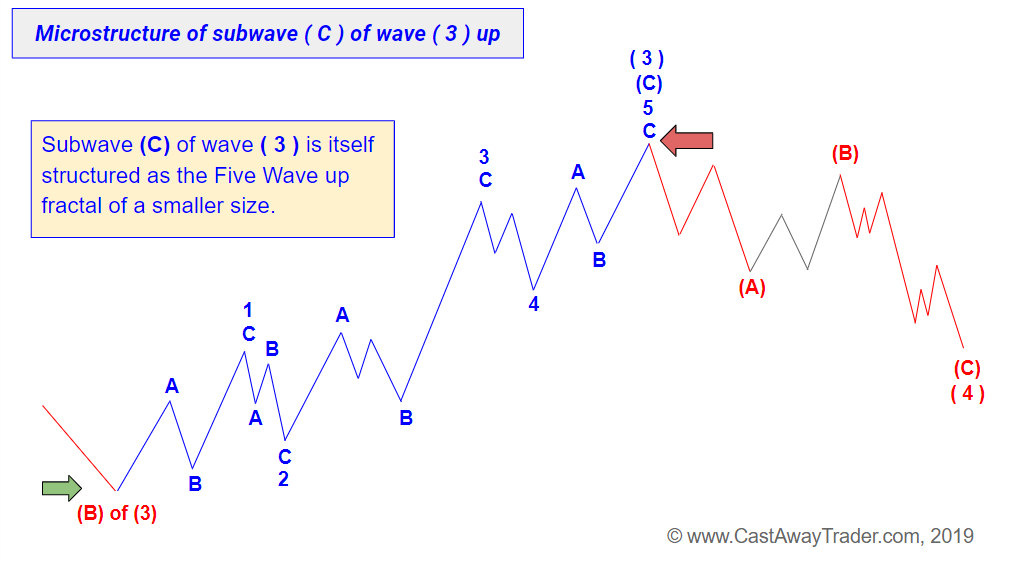 Inside subwave (C) of (3) we can see the very same structure composed of five major waves. Each wave is composed of three subwaves labelled as “A-B-C”.

Implication for trading If you went long on a corrective pullback and a new impulsive wave started as expected, you need to know when it is time to exit your long. Because an impulsive wave follows the structure of the Five Wave fractal you can simply count those micro waves to nail its completion. The second implication is that inside a micro Five Wave up fractal the low made by a previous corrective wave is your stop loss. If price violates its low it diminishes chances for continuation of the move along that Five Wave fractal.

3. When you can call the Five Wave fractal completed.

You can not call completed any Five Wave fractal until following important conditions are met:

( 2 ) You can confidently recognize a completed wave 3 inside that Five Wave fractal. First, you have clean subdivision of wave 3 for A-B-C structure. Second, subwave C of wave 3 is bigger and has a steeper slope of ascent (for up trending structures) than subwave of A of wave 3. Third, wave 3 followed by a corrective wave 4 in a counter trend direction that retraced at least 23.6% of preceding trending move in wave 3. 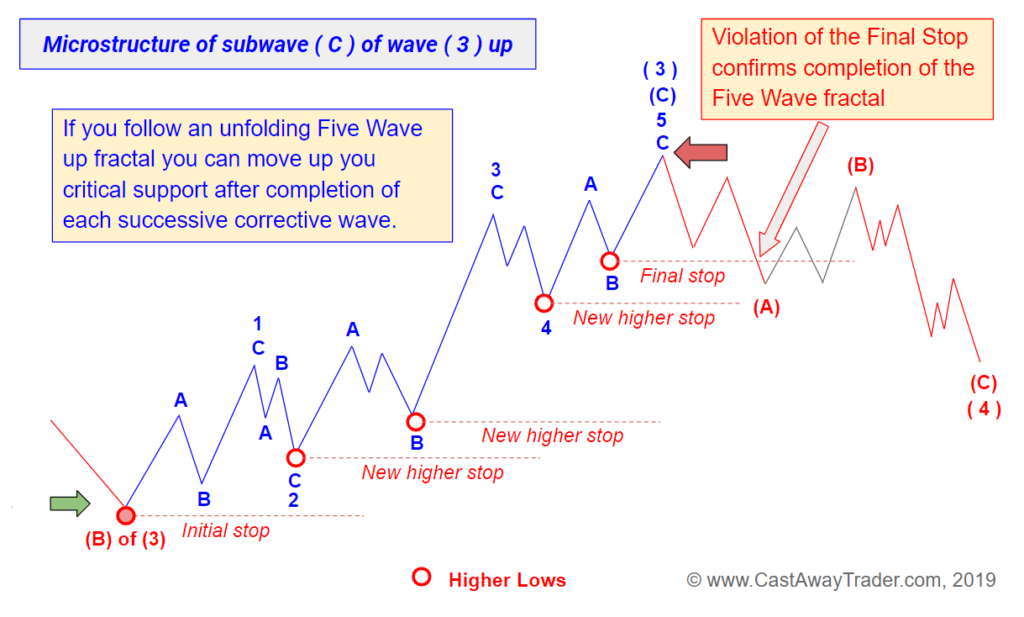 The best confirmation of completion of the Five Wave up fractal is violation of the Final Stop. That violation should happen after the final push to the highest point of the fractal in subwave C of wave 5 up. A pullback may be counted a corrective subwave B of wave 5 and accordingly its low can be considered the Final Low (critical invalidation point for the whole Five Wave up fractal) only after the very final subwave C of wave 5 manages to make a new highest high of the whole fractal. At the moment that final subwave makes the highest high you should start rigorously wait for violation of the Final Stop support.

Implication for trading If you hold long position you may consider exiting it or at least hedging it when subwave C of wave 5 makes the highest high of the unfolding Five Wave up fractal. At this point we still can not call the Five Wave up fractal completed because we have not got confirmation of completion which comes in the form of violation of the Final Stop.

4. Why corrective waves are barely predictable and difficult to trade

When price keeps moving along the Five Wave up fractal there is so called underlying momentum. It’s like some invisible force that keeps pushing price higher and support the price on every pullback. When price moves along the Five Wave up fractal bulls control the market. With every new higher high more and more traders get convinced about continuation of the move even higher. More and more traders get bullish about the market. And with every new higher low made by a pullback bears get more and more disappointed and discouraged. They feel helpless because not only price does not stop but its speed of ascent starts to accelerate.

The Five Wave up fractal gets completed when the vast majority of traders go long and the last bears capitulate and close their unfortunate short positions. The Five Wave up fractal gets completed because no more buyers willing to buy at that price level are left. Everyone has bought and expecting to make a nice profit on continuation of the rally to new higher highs. Every pullback in up trending market starts not because bears finally get together and decide to attack but because bulls get exhausted.

When a pullback starts bears become a driving force behind a countertrend move for a short period of time. But after the very first move down bulls come back to life. They see lower prices and they still believe in the strength of the trend. They start buying again. Bulls quickly drive price to recent highs. But here again one thing becomes evident. There are no bulls willing to buy at that level. And this is when bears make another attempt to break down the trend and push price to new lows.

5. Know weaknesses of the wave theory

The hard truth is a crystal ball that can provide you with 100% accurate forecasts does not exist. If you thought that the Harmonic Elliott Wave theory is that magic instrument I had to disappoint you.

6. How to determine position size