Get Regular Updates of the US Stock Indices

SPX - When This Corrective Rally May Stop?

On the Model chart below you can see that I count the rally started off the low on June 3rd, 2019 as a corrective wave b up of ( b ) down. 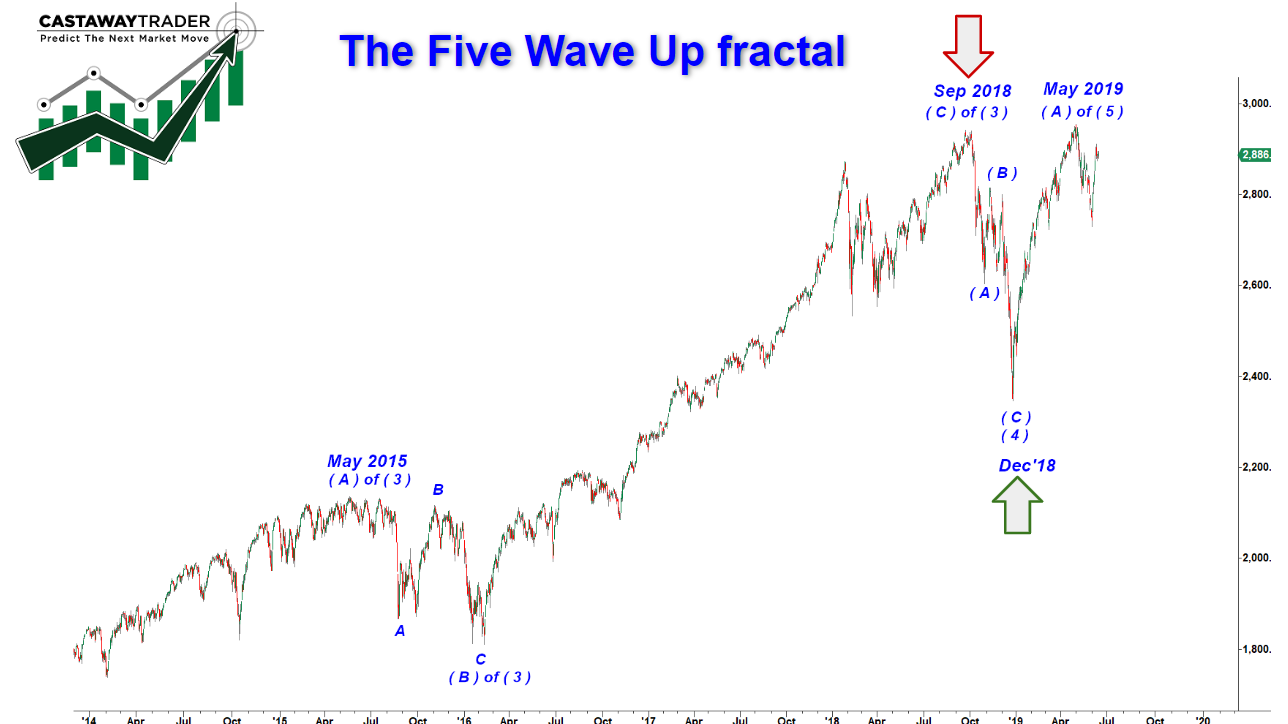 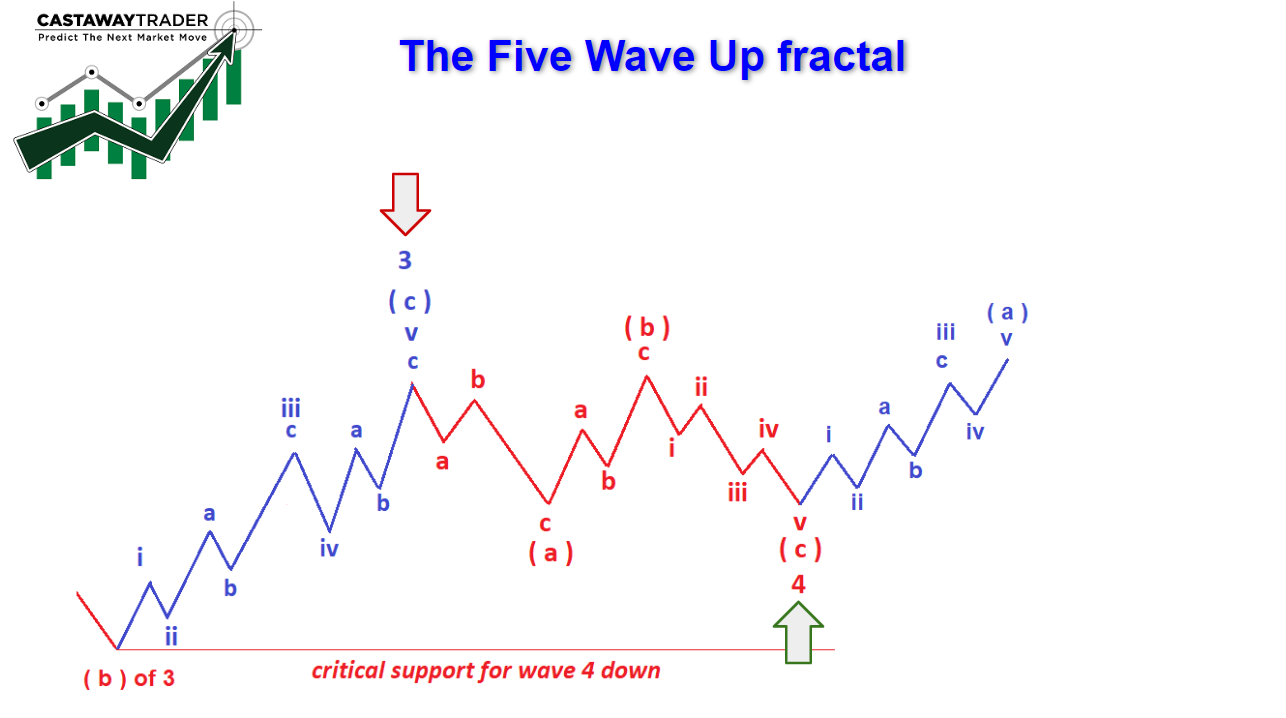 I count that (A)-(B)-(C) down as a complete wave ( 4 ) down. And the reason why I think wave ( 4 ) down is behind because that pullback started off the top made in September 2018 and bottomed in December 2018 was deep and scary enough to significantly alter general sentiment in the market.  Such drops after a strong rally in wave ( C ) of ( 3 ) up should cool down bulls and convince them to cut longs and entice bears to start shorting the market again.As you can see on the Model chart above, wave ( 4 ) down is always followed by an impulsive looking rally in wave ( A ) of ( 5 ). That wave ( A ) of ( 5 ) normally targets the previous top made by wave ( A ) of ( 3 ) up. And, as you can see on the chart below, this is exactly what we got. The market rallied for four months and topped after retest of September 2018 top.

If that wave ( A ) of ( 5 ) has topped, then we should get a corrective wave ( B ) down. That wave ( B ) down is normally structured as A-B-C. The drop we got in May 2019 does not look deep enough to be the whole wave ( B ) down. The preceding rally lasted for four months and the following pullback lasted only one month. I think it is pretty reasonable to expect another leg down in wave C of ( B ) down ( the thick red line on the chart below). Under this scenario the main question is when and where wave B up will top. I keep repeating that corrective wave B in the direction of the main trend are the most tricky ones and the least predictable ones. Such wave B may retest the top of wave ( A ) of ( 5 ) topped on May 1st, 2019. Moreover, quite often such waves B may make a nominal new high over the top reached by a preceding rally of an impulsive wave in direction of the main trend. When that wave B finally tops out, under that scenario we should get an impulsive looking decline in wave C down targeting 100% – 123.6% extension of wave A down. In addition, to forecast where wave ( B ) of ( 5 ) may bottom we should apply retracement tool to the rally of the wave ( A ) of ( 5 ). It gives us three most common retracement levels 50%-61.8%-76.4%. Confluence of those two tools, extensions and retracements, provides us with the Green Target zone in between of 2,650 and 2,580. 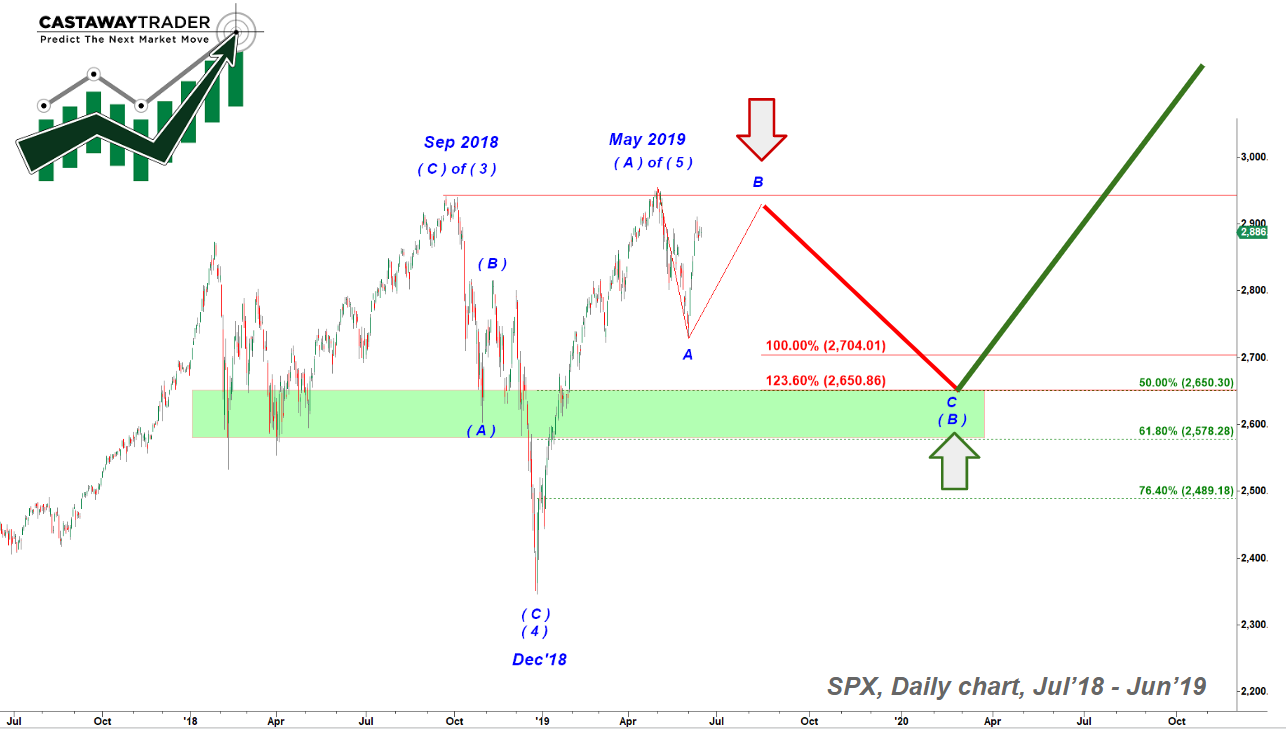 Check out
the recent updates