Russell has topped as expected. Now what?

In June, July and August I posted counts expecting Nasdaq to top in the large wave 3 up. On August 28th I posted the following outlook:

“To complete the upside structure we still need at least a nominal one more high. However, the primary scenario is more bullish with an ideal target is at 1,772 – 1,788 where we have a nice confluence of fibs calculated off the waves of several different degrees.”

Russell topped on August 31st at 1,742.09 making a new nominal high but under the target area. Below you can see the price chart posted on 28 August 2018.

After we completed wave 3 of a large degree we need to zoom-out to a weekly chart to check potential confluence of targets for the bottoming zone in wave 4 down.

There are alternative counts. Both assume that we have not completed the bullish structure off 2016 lows. That means we should see new all time highs after this correction is over.

Let’s talk about more bearish scenario. The weekly chart below assumes that wave ( C ) of ( 3 ) has completed. That would mean we should expect a deep correction in wave ( 4 ) down.

Lets examine what would be a target zone for that bearish scenario.

First what we should do is to add 200 week moving average ( a magenta line ). This is a line that stopped three previous corrections. That line gives us a target of 1,322.

Second, we check the most common retracement ratios applied to the whole wave ( 3 ) up. That gives us a support zone between 1,309 and 1,242. 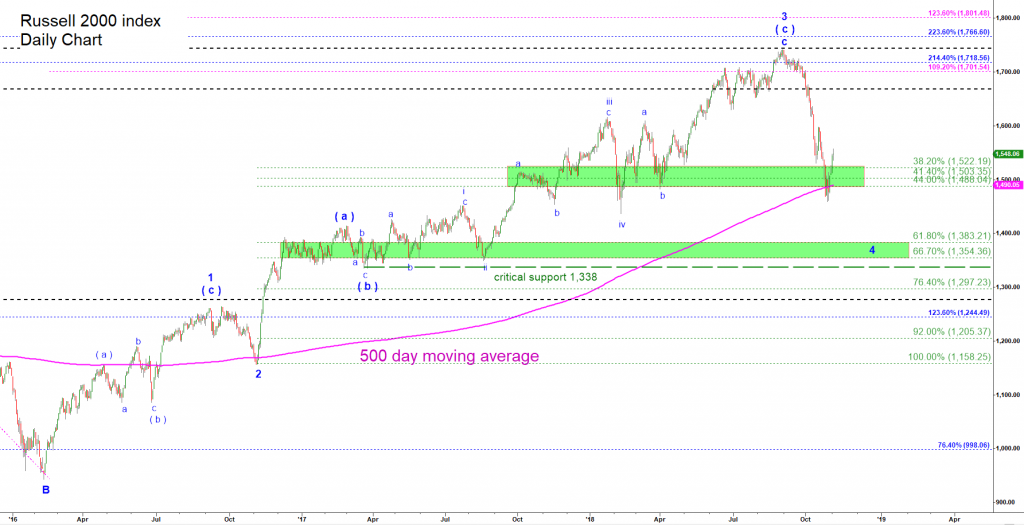 Under that bullish count this drop has already reached the high probability target zone for a corrective wave 4 down. That is the higher support zone on the chart above marked with green color. The second lower green target zone is located between 1,383 and 1,354. That bullish scenario will be my primary scenario as long as the critical support at 1,338 holds.