Almost two weeks passed since my last post about NQ but the picture has not changed.

We are dealing here with a topping A-B-C structure off the December low. In the previous post I outlined a resistance area in between 6,809 and 6,724.

So far NQ has hit the resistance at 6,807 twice. At this point there is a potential that after a pullback we can see another higher high targeting 123.6% extension at 6,861. That target is located under the critical resistance of 6,900 so it would not harm the bearish scenario.

The strength of that rally off December 2018 low wants us to doubt the bearish scenario. Indeed it “feels” and “looks” like we would not see another move to a new lower low. But we should not pay attention to how it “feels” or “looks”. So far the market was unable to take out the critical resistance. In addition, the main question for us here is whether we have an immediate high probability trading setup. And I do not see any. I went short when we first hit the resistance at 6,807 on January 18th and closed my short the following Tuesday when market dropped. That was an easy trade. At this point it is too late to buy. Even if the bottom of the large corrective wave  ( 4 ) down was made in December and we got a start of a new rally in wave 1 up shaped as A-B-C then we should expect inevitable corrective wave 2 down.

Do we have a good short setup here? Not sure. I would go short if we get another move up to 6,860. That move would make the micro structure of the wave C up complete. 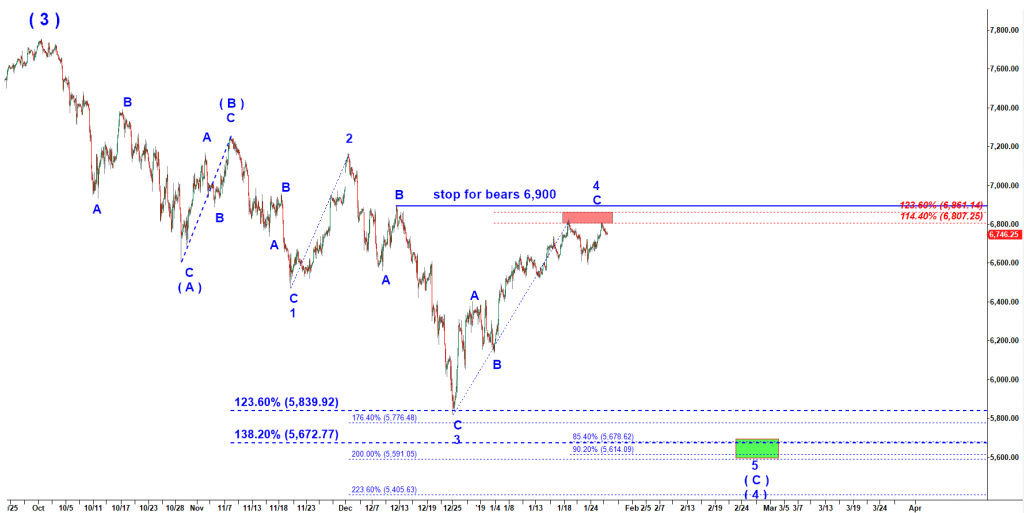 Learn to predict the next market move by yourself!
Check out my latest updates