The traditional Elliott Wave theory seems to have an overabundance of rules and guidelines and that appears to open the door subjectivity. Is the Harmonic Elliott Wave more straightforward?

Frankly, I think the real problem of the classic Elliott Wave theory that it does not have enough strict rules and has too many acceptable exceptions. Elliott wanted to make his theory too perfect and in addition to his main idea that all trending moves are structured as the Five Wave fractal he proposed that waves 1, 3 and 5 are also structured as the very same Five Wave fractal but on a smaller scale ( please see the chart below). 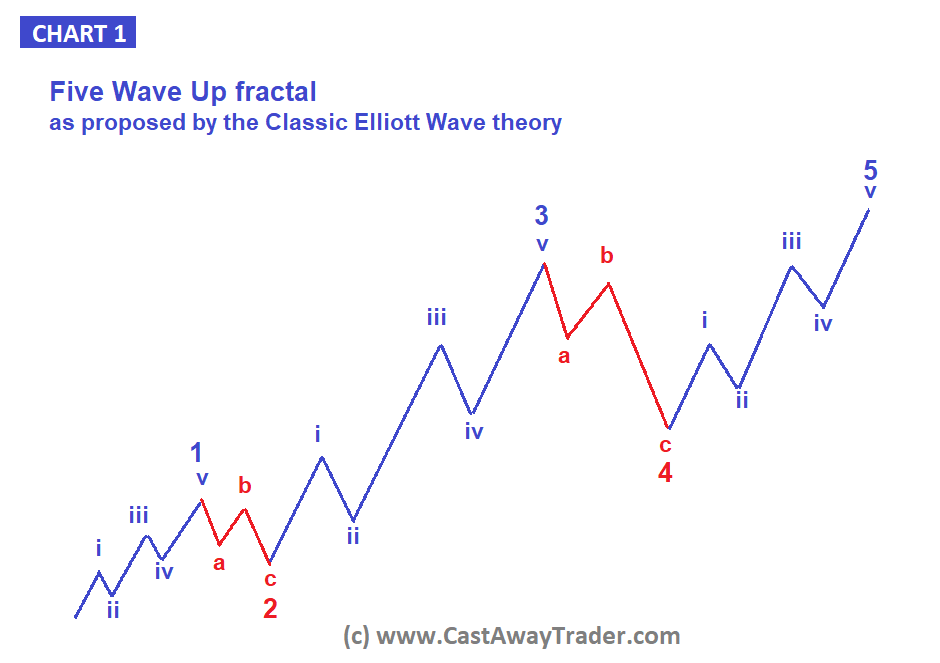 As you can see on the chart above, waves 1, 3 and 5 are composed of five smaller waves i, ii, iii, iv and v. By proposing that idea Elliott discovered a fractal nature of price moves. His breakthrough was that the same similar patterns combined together form the same patterns on a larger scale! The theory was supposed to make trading and investing as easy as counting from one to five! Indeed, you sell when you can count five micro waves up and you buy again at lower price when you get an a-b-c shaped corrective move down! The same set of riles can be applied to price charts of any time frame, from 5 min to a monthly one. What could have been easier?

It seems like pretty soon Elliott realized that the five wave fractal could not explain every trending price move either up or down. The Five Wave fractal was simply too perfect to be found in every market and any time frame. He and followers of his traditional theory found many cases where the final wave 5 did not have that perfect subdivision into five smaller waves. And then practitioners of the classic Elliott Wave theory called such case a “truncation”. In plain English it sounds like: “Oops, the theory can’t explain this so lets agree its a rare exception. Lets find a fancy name for that unfilled gap in the theory not to apologize for our inability to nail the top.” 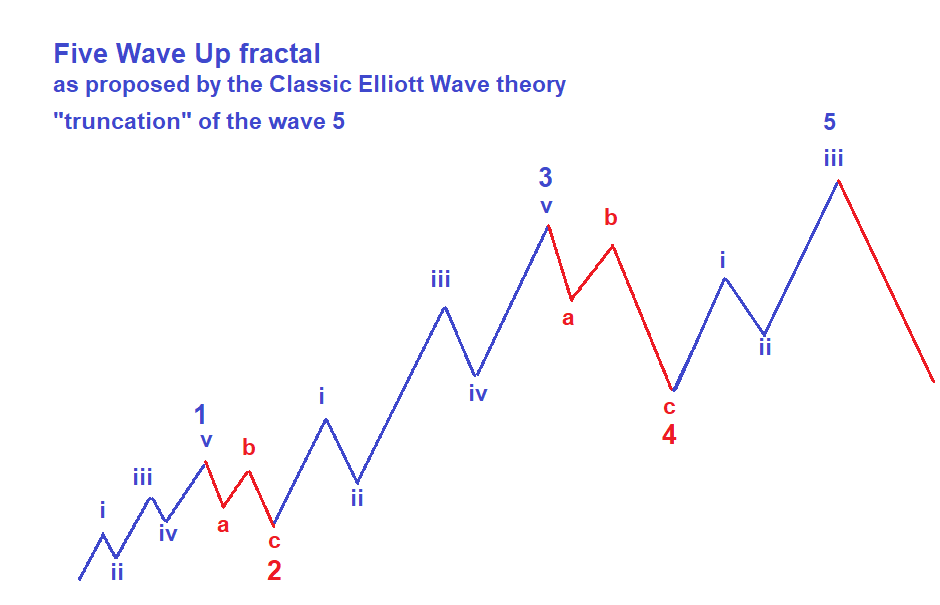 On the chart above you will see that the final wave 5 up is subdivided into three smaller waves instead of five waves as prescribed by the Classic Elliott Wave theory.

You may say I exaggerate the problem because truncations happen at the very top of the five wave up fractal or very bottom of the five wave down fractal. But let me remind you that the main benefit of the theory was to provide a trader with a mighty yet simple-to-use prediction tool based on assumption that any larger wave or subwave in direction of the trend has to be be subdivided into five waves. Some protagonists of the classic theory may say that I misunderstood the idea behind that method. However, Elliott himself became known for several accurate predictions about exact tops and bottoms in the Industrials index in 1935.

One of the most valuable principles of the theory was that the final fifth wave can not stop until it fully replays its own five wave structure of a smaller degree. By complete its own waves i, ii, iii, iv and v wave 5 gets completed and finalizes the whole bigger five wave up fractal.

I personally got fooled by that theory many times. I expected any wave 5 up to keep pushing price higher until I could finally count five micro waves inside it. And then suddenly after micro wave iii of 5 price would collapse… That could mean that you might have followed that unfolding five wave up fractal for weeks preparing to short its completion in anticipation of a larger corrective move in counter trend direction only to see it collapsed prematurely! And I used to be left behind mumbling to my followers that according to the theory we really needed one more high in micro wave v of 5…

Imagine your boss assigns you a specific task but you perform only 66% of what he said. And then time comes to report and you present a partially completed job explaining that you have truncated the task. Would your boss be pleased with that type of explanation? I was certainly not!

More exceptions to the theory

But that was only the beginning of the problems with the real life application of the Classic Elliott Wave theory. Pretty soon practitioners of the classic theory found waves in direction of the main trend that were supposed to be structured as impulsive waves and to follow the five wave fractal but they did not. Instead they were just a bunch of a-b-c’s, three wave moves. Did that observation make Elliott or his followers to change the tenets of the theory? Of course not! They called those uncomfortable cases when the theory did not work “exceptions”. This is how they introduced the “Leading Diagonal” and the “Ending Diagonal”. 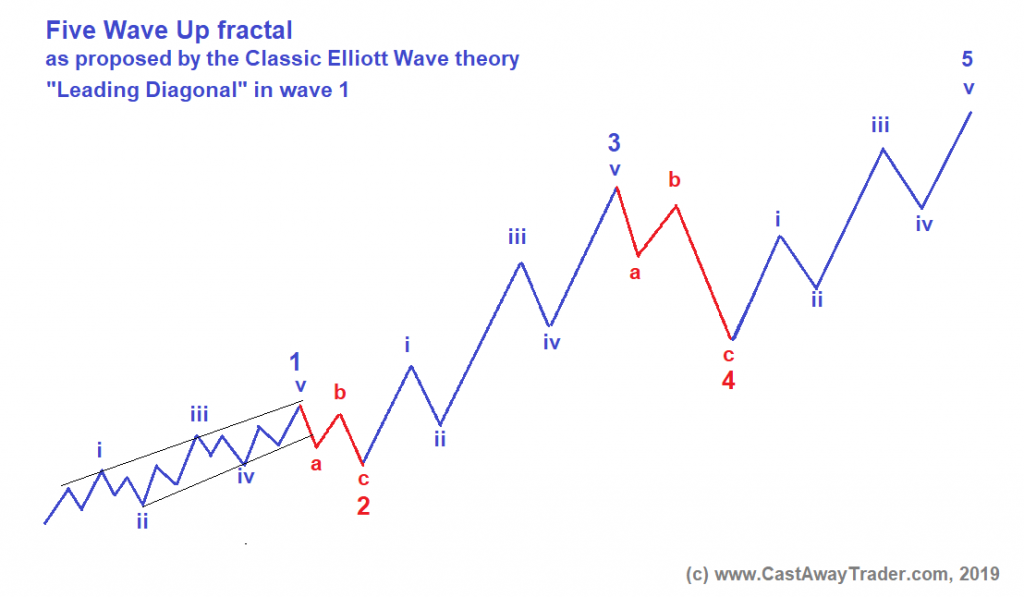 “Leading Diagonal” can be found on the chart above at the beginning of the five wave fractal, in wave 1. As you can see, the five micro waves i, ii, iii, iv and v together compose a large wave 1 up. But note that each of those five micro waves, impulsive and corrective alike, is composed of three waves a-b-c instead of canonical five micro waves.

“Ending Diagonal” can be found at the very end of the five wave fractal, wave 5. Again, as you can see on the picture below, all the five micro waves that compose wave 5, impulsive and corrective alike are composed of three micro waves a-b-c.

At this point I want to remind you that the main idea behind the Classic Elliott Wave theory was that price follows a specific repeating five wave fractal and impulsive waves within that fractal are composed of five waves of a smaller degree. However, as we can see, the author and practitioners of the classic Elliott Wave theory had to admit that the main assumption of that theory just did not work all the time…

In contrast, the Harmonic Elliott Wave theory does not have so many exceptions. It does not allow for “truncations”, “Leading Diagonals” or “Ending Diagonals“. The Harmonic Elliott Wave theory has a simple yet solid foundation which is all trending moves have to be structured as five waves up or down and each of those five subwaves is subdivided into three subwaves a-b-c!