CTRL should complete a huge correction by making another low

Control4 Corporation (Control4) is a provider of smart home and business solutions. The Company’s smart home and small business solutions provide consumers with the ability to integrate audio, video, lighting, temperature, security, communications, network management and other functionalities into a unified automation solution, customized to match their lifestyles and business needs. Its Control4 solution integrates various third-party devices and systems into a unified solution for mainstream consumers.

You may see that CTRL made so called an “orthodox top” at $37.62 as R.N.Elliott called it in September 2018. He called it “orthodox” because a higher high it is made by a corrective wave B up of ( B ) down in the course of expanded flat corrective structure.

To complete the huge corrective A-B-C down structure the final wave C down should complete its five wave structure. Inside an expanded flat structure wave C normally targets either 176.4% or 223.6% extension of the wave A down (the first leg down of the corrective A-B-C structure ). We should also pay attention to retracement fibs of that impulsive rally in the wave ( A ) up. We should watch an important 76.4% retracement fib located at $12.52. In full accordance to the classic five wave down fractal wave ( a ) of ( v ) down stopped at the low reached by the previous drop in wave ( iii ) down. Off that low made by the wave ( a ) down we should see a corrective wave ( b ) up. And that corrective wave ( b ) up should be followed by the final impulisv edrop down in the wave ( c ) of ( v ). That drop has to make a new lower low and would complete a larger wave C down, which in its turn would complete the whole (A)-(B)-(C) down pattern. Completion of that huge correction means that we should get another major rally in wave (C) up which should be at least equal in size to the first rally in wave ( A ). We are talking about a large multi year rally targeting a new all time high 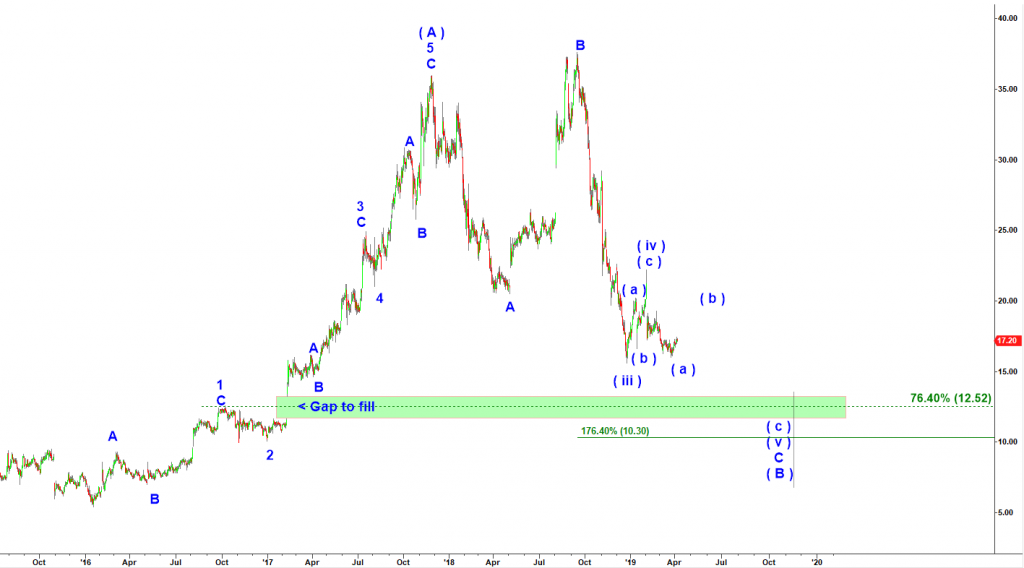 The company has great profitability ratios and does not have debt. However, it i snot cheap. Currently it is traded at 16 x Price-to-Free-Cash-Flow. If its price keeps moving down as expected by my count below, the valuation would become much more attractive from perspective of Value Investing and would make that stock a buy from perspective of technical and fundamental analysis. The only concern is that CTRL is a small company with Market Capitalization of $460 mln. I like to invest in companies with capitalization exceeding $2 bln. The bigger the company the less is the risk it will go out of business as a result of a management mistake. However, taking into account that the company does not have debt I am willing to consider investing in it.